Reuben Eaton Fenton, the youngest son of George Washington Fenton and Elsie Owen, was born on the Fourth of July, 1819, in the Town of Carroll. The family lived in what was variously described as a frame house or a log cabin between Frewsburg and Fentonville. The Fenton properties were extensive, and although G.W. Fenton was often described as owning a farm, it is unlikely that he was a farmer as, apart from probably a family cow and a couple of chickens, the former teacher ran a general store in Frewsburg. Almost all of the property was covered in forest and the area probably looked much as it does today.

He spent his first years of school in an old log schoolhouse in his district. When he was fifteen he went away to school in College Hill, Ohio. A year later, he returned to Chautauqua County and attended Fredonia Academy for two terms. He left Fredonia because of poor health and spent some time traveling around the Ohio area. For six months, he taught school near Cincinnati and then returned to Chautauqua County. At the age of seventeen, Reuben entered the law offices of the Waite Brothers in Jamestown to study law. He also taught at the Jamestown Academy. He was forced to discontinue his studies, however, when his father’s business failed during the Panic of 1837, and the ensuing economic depression. Reuben and his brother, George W. Jr., bought the store from their father, settled with his creditors, and operated the store successfully for several years. 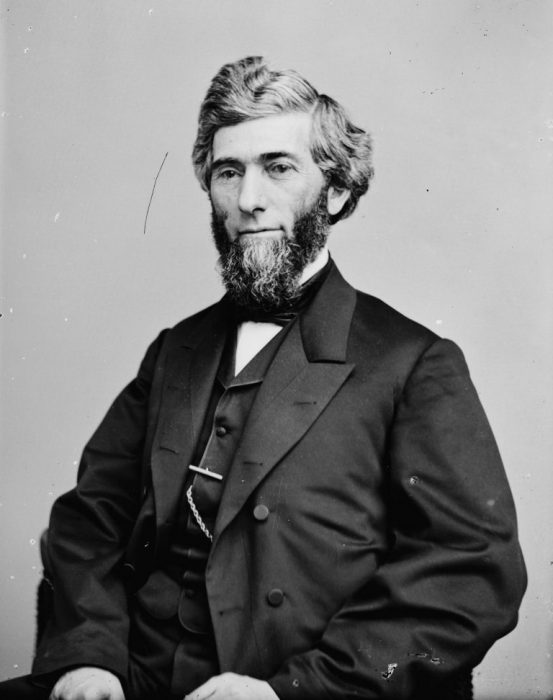 Reuben became moderately well off as a storekeeper but around 1838, he began buying and selling parcels of land. These properties were heavily forested and, as he harvested the timber, he then sold the cleared land for farmsteads. Most of the timber was sawn into boards at one of the many sawmills along Frew Run. The boards were made into rafts and then floated down the Conewango, Allegheny, and Ohio Rivers to Cincinnati where it was sold.

Fenton’s business initiative started small but it was not long before he was sending off rafts each spring worth $40,000 to $50,000. His role in the lumber business likely supervised the “felling” and sawing of the timber and then traveling by horse to Cincinnati to sell the lumber. It is doubtful that he ever participated directly in felling trees or piloting the rafts. Fenton was known as a “gentleman lumberman” and a “close” or hard bargainer.

In 1840, at the age of 21, Fenton was elected a colonel in the 162nd regiment of the New York State Militia. On February 5, 1840, Fenton married Jane Frew. Unfortunately, Jane died two years later during childbirth. On June 12, 1844, Fenton married Elizabeth “Elsie” Scudder. The couple remained for a time at the Fenton homestead and then built a frame house of their own next to the family store on Frewsburg’s main street. The store and the Fenton home are now separated by the intersection of Pearl Street.

Between 1846 and 1852, he served seven one-year terms as the Town of Carroll Supervisor while also serving three one-year terms as Chairman of the County Board of Supervisors. These posts were gained despite the fact that he ran as a Democrat in a Whig Party dominated area. Fenton became involved in the Free Soil Party. The “Free Soilers” were a splinter group of rural Democrats who were progressive, and reform-minded.

In 1849, he was the Democratic nominee for state Assemblyman from eastern Chautauqua County, but he was defeated in a close election. In 1852, with the support of the Abolitionists, and by a narrow margin, he received the Democratic nomination for U.S. Congressman. In 1853, at the age of 34, Fenton took his seat in Congress on the Democratic ticket. During his years in Congress, he supported the cheap postal system, an extension of invalid pensions, the regulation of immigration, and the repeal of the fugitive slave law. He was opposed to the invasion of Kansas, the bounty laws, and payments for the losses of rebels in the Civil War.

It has been said that he entered Congress an enthusiastic Democrat and left it one of the most popular and uncompromising Republicans. Most felt that the change was not in him but in the Democratic Party. Along with other political figures, Fenton was instrumental in the founding of the Republican Party. He was secretary of the party’s first meeting in Washington in 1854, Chairman of its first New York State convention in 1855, and was a delegate in the first national nominating convention in 1856. When the new party came into existence, he naturally changed his affiliation.

During his political career, Fenton became one of the victims of the sometimes-acidic cartoonist for Harper’s Weekly. Years prior to the civil war, he had gained the nickname “The soldier’s friend” due to his efforts on behalf of returning War of 1812 soldiers by sponsoring, promoting, and securing the passage of the Pension Act for those veterans.

Later, the nickname was solidified during the Reconstruction Period as his efforts turned to Civil War soldiers. His aid to these soldiers and their families included visiting wounded men in hospitals and attempting to locate Chautauqua County soldiers for their relatives, as well as his practice of “franking”, or, signing his name to the soldier’s letters so they could avoid postage costs.

Fenton declined the Republican nomination for Governor of New York State in 1862, on finding that General Wadsworth, a particular friend, was a candidate. James Samuel Wadsworth, from Geneseo, New York, devoted his life to public service and politics, eventually becoming a Free Soil Republican. At the start of the Civil War, he offered himself to the Union cause, rising to the command of First Division, First Army Corps, at the Battle of Gettysburg. He was a candidate for Governor of New York but refused to leave the army to campaign and was not elected. As brave as he was stubborn, he commanded the defense of Washington in 1862 and died after being wounded in the Wilderness campaign in 1864. Horatio Seymour won the election for the Democrats and Reuben remained in Congress.

President Lincoln needed the Republican support of New York State, which he considered the most important state in the Union. Congressman Fenton wrote, “On August 22nd, [1864], I received a telegram from Mr. John G. Nicolay. Private Secretary, saying that the President desired to see me. As near as I remember, in his exact language he told me, ‘You are to be nominated by our folk as Governor of your State. Seymour, of course, will be the Democratic nominee. You will have a hard fight. I am very desirous that you should win the battle.’” 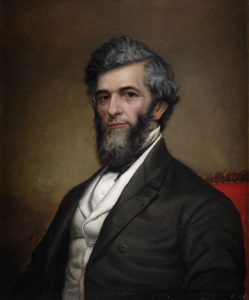 Taking the oath of office on January 1, 1865, in Albany, he has been referred to as the “Civil War Governor”. Since the war ended less than four months later, the nickname does not carry much weight. It was Fenton who mustered out the New York State troops, however, and was quoted as saying to the returning regiments of the disbanded army: “Soldiers, your state thanks you and gives you pledge of her lasting gratitude. You have elevated her dignity, brightened her renown and enriched her history. The people will regard with jealous pride your welfare and honor, not forgetting the widow, the fatherless, and those who were dependent upon the fallen hero.”

Fenton served two two-year terms as Governor from 1865 to 1869. He helped build up the economy of the State after it had been hurt by the civil war. His administration was marked by a number of reforms such as the creation of an agency to supervise and inspect all state hospitals, asylums, and homes … all formerly unsupervised. He enacted legislation for raising the minimum standards for teachers; the establishment of six new state schools for training teachers; and the abolition of all tuition and other charges in the public schools … an act followed by a one-third increase in school attendance within one year.

He also signed the charter for Cornell University on April 27, 1865, a unique land grant institution where any person could find instruction in any study.

As the election of 1868 drew near, Fenton became interested in the nomination for vice president. However, his ambitions were thwarted by through the influence of Thurlow Weed, a bitter enemy of Fenton’s. Weed was detested by Mary Todd Lincoln; he was one of those she blamed for opposition to her federal aid after President Lincoln’s assassination. He retaliated with very pointed criticism in his New York City newspaper, the Commercial Advertiser. Fenton then turned his attention to the U.S. Senate and in 1869 was elected to one six-year term. In 1874, he decided not to run for re-election and when his Senate term expired the following spring, he retired from politics.

After leaving the Senate, Fenton retired to Jamestown and became first a director and later, President of the First National Bank. His last act of national service was his participation in the International Monetary Conference in Paris in 1878. Fenton was the head of the American Commission to the Conference.

The Chautauqua Democrat, on September 2, 1885, printed, “For the past week, Jamestown has been in mourning for its chief and honored citizen, Ex-Gov. R.E. Fenton. In our last issue, we stopped the press to make the brief announcement of the sad event which occurred on Tuesday afternoon, Aug. 25, between two and three o’clock. He had just returned from dinner and was sitting in his accustomed chair in the directors’’ room of the first National Bank perusing a letter just received. Cashier Morgan wishing to consult him stepped into the room and found him in an unconscious condition, though breathing heavily. Assistance was instantly summoned, Drs. Bemus and Peterson were quickly present and, everything done to restore him to consciousness without avail, death ensuing in a few moments.”

With his death, Jamestown lost its leading citizen and a career which had seen Chautauqua County develop from a frontier lumber area into a center for industry and commerce. Again, from the Chautauqua Democrat, The funeral services were held on Saturday afternoon, [August 28, 1885] commencing at two o’clock. They were attended by the greatest number of people of any funeral ever held in Jamestown.”

At 3:15 PM, after two hours of lengthy tribute, the casket was placed in the hearse which was “drawn by four white horses, covered with black nets and led by four colored grooms.” “The Fenton Guards formed a hollow square, open at the rear, about the hearse and marched with their muskets in reverse order.

Fenton was buried in the Maple section of Lake View Cemetery in the Fenton Mausoleum. His son, Reuben Eaton, his wife, Elizabeth, his grandson J. Niven Hegeman, Jr. and Hegeman’s daughter, Elise Appleby, joined him through the years.