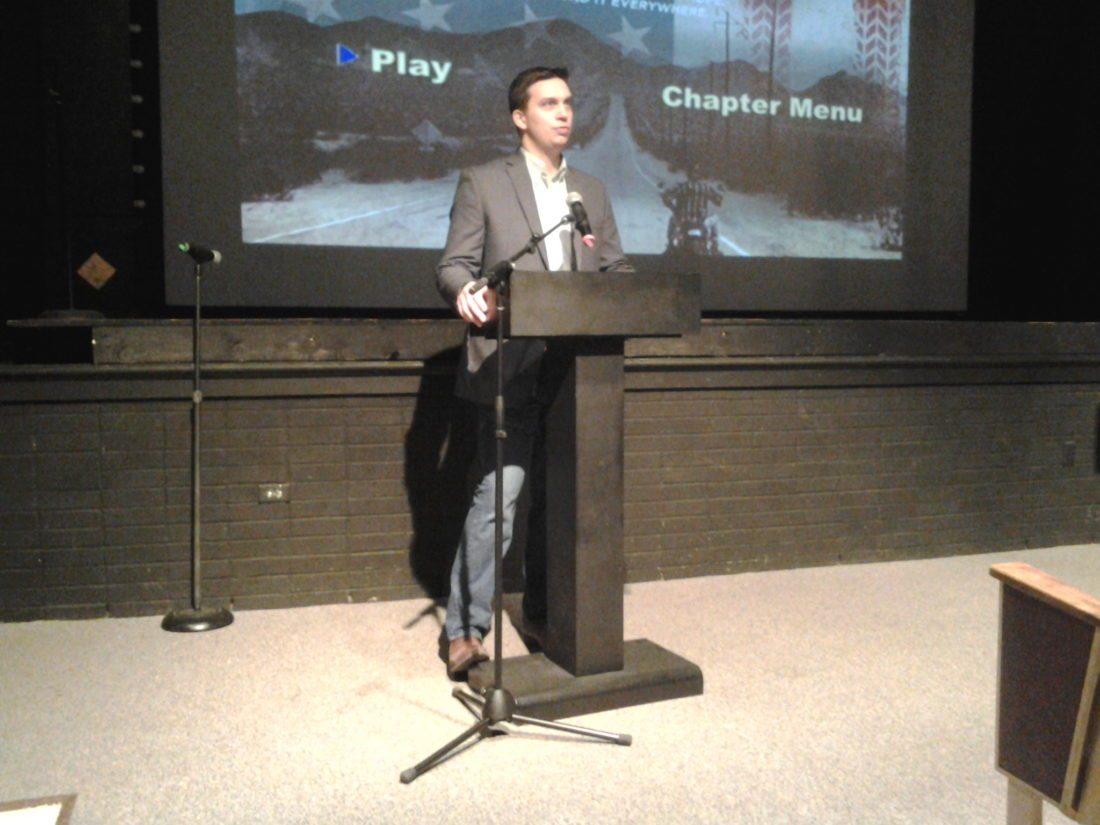 The average suicide rate for American veterans is 22 a day.

That is one reason why Jamestown native Theo Collins will once again be presenting the documentary film “Project 22,” which raises awareness of the high rate of suicide among veterans, at the Schermann Theater at Jamestown Community College starting at 7 p.m. Monday.

Collins, a military veteran and executive producer of the film, first presented the film at the Scharmann Theater last year, which received a lot of notoriety locally when 150 people attended the film presentation, said Barbara Cessna, Vets Finding Vets coordinator.

“Last year we had 150 people attend and we were stunned there were that many. This year, we are hoping for more, but we were very pleased with the number last year, and there were a lot of veterans in the crowd,” she said.

“The veterans came because they wanted to figure out how they could help. It is good for anyone who is a family member of someone who committed suicide or for anyone who is thinking about it because it gives you options and give you good advice.”

Cessna said the first few minutes of the film is very dark, but transforms into a very uplifting movie.

“They have different veterans at the beginning talking about how close they came,” she said. “The first few minutes are very dark and dismal, but the rest of the film is inspirational, and you leave feeling like you could help if someone called you in the middle of the night and said they were thinking about it.”

The film’s name derives from a 2012 Veterans Administration study that revealed 8,000 veterans commit suicide each year, which would be an average of 22 a day. Collins, a practicing attorney in Pittsburgh, told The Post-Journal last year he became involved in the project because he is friends with Egbert, who was Collins’ squad leader when he was a Marine sergeant who was deployed to Afghanistan in 2010 and 2011 in support of Operation Enduring Freedom.

“We stayed friends after; I moved to Pittsburgh and he moved to Long Island. He came up with the idea (for the film) with co-director King. Because we stayed in touch, I learned about “Project 22,“‘ Collins said. “I thought it was important that they visit Pittsburgh on their ride. After convincing them to come to Pittsburgh to film, I became a location fixer. I found people for them to interview in Pittsburgh, and, after they left, I assisted them with a lot of business matters. At the time, I was in my second year of law school and Dan and Doc had never directed a film before. We were all first-timers in the project. So I became semi-responsible for business affairs behind the scenes. That is how I fell into being an executive producer.”

Collins said Pittsburgh was the second-to-last stop before the trip ended at Ground Zero in New York City. He said Pittsburgh was an ideal location for the film because there are a lot of veterans and innovative programs to assist them as they readjust to civilian life.

“There was a lot in Pittsburgh (the filmmakers) needed to be exposed too like Dr. Roger Brooke, who runs Duquesne’s clinical psychology program. They also interviewed in the film ‘Rocky’ Bleier, former Steeler and Purple Heart holder,” Collins said. “There area a lot of really good programs in Pittsburgh, which made it one of the most important stops on the ride.”

Cessna said Collins provides real insight into the making of the film during a question and answer segment that will follow the showing of the film.

“He has stories from behind the scenes that makes it a better documentary when you know what is happening,” she said.

Along with the the Fenton History Center’s Vets Finding Vets Program, the film is also being sponsored by the Pvt. Joseph P. Dwyer Program, and Jamestown Community College’s Veterans Club. The Vets Finding Vets program launched in 2014 and is partially funded through a grant from the Chautauqua Region Community Foundation. The Joseph P. Dwyer Program, launched in 2017, is coordinated by Cindy Reidy and is funded by a state grant.

“Project 22” can be streamed online at pbs.org and there are free copies of the film or screenings at some Veterans Administration clinic locations. Medicinal Missions, the production company that made the documentary, continues the awareness campaign, through events and social media, leading up to and following the release of the documentary. “Project 22” was entirely crowd-funded via an IndieGoGo campaign and private donations.