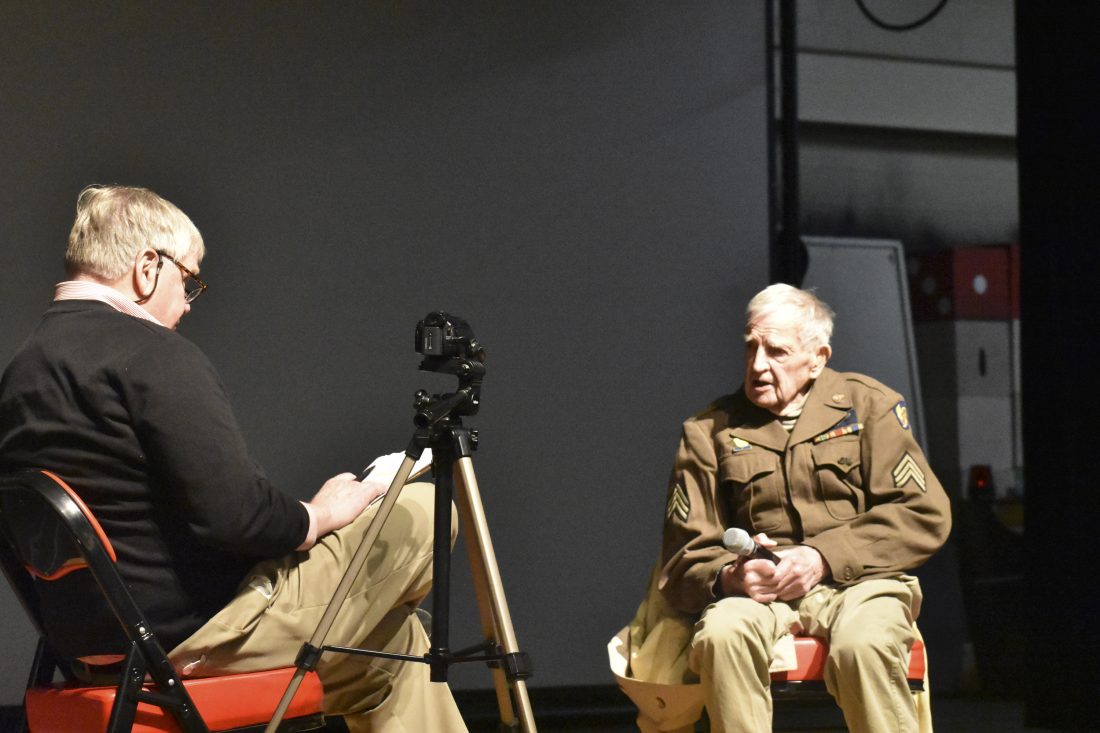 Phillip Wight, an Army Air Force veteran who served in World War II, participated in Operation Chowhound in 1945 that helped feed a starving population in a German-occupied Holland. But it wasn’t until the 1990s he ever felt validation and even forgiveness for his wartime actions while walking the shoreline of Myrtle Beach when he met someone saved by the humanitarian mission many years before.

Speaking to a packed auditorium at Maple Grove Middle and Senior School, Wight recounted the events that led him to enlist and later volunteer for a mission that would save innocent lives.

On Wednesday, Wight was interviewed by the Robert H. Jackson Center’s Greg Peterson in association with the Fenton History Center’s “Vets Finding Vets” program. Peterson told the audience that Wight was “the real deal” and called him an “icon.” Additionally, two Maple Grove students read written accounts of what’s known as the “Hunger Winter” as famine struck the Netherlands to give context to the later operation.

Wight celebrated his 96th birthday the week before. As a surprise a cake was delivered to him on stage and the audience began to sing “Happy Birthday.”

Barb Cessna, project coordinator for “Vets Finding Vets” at the Fenton History Center was honored to have been able to bring Wight to Bemus Point to share his story. 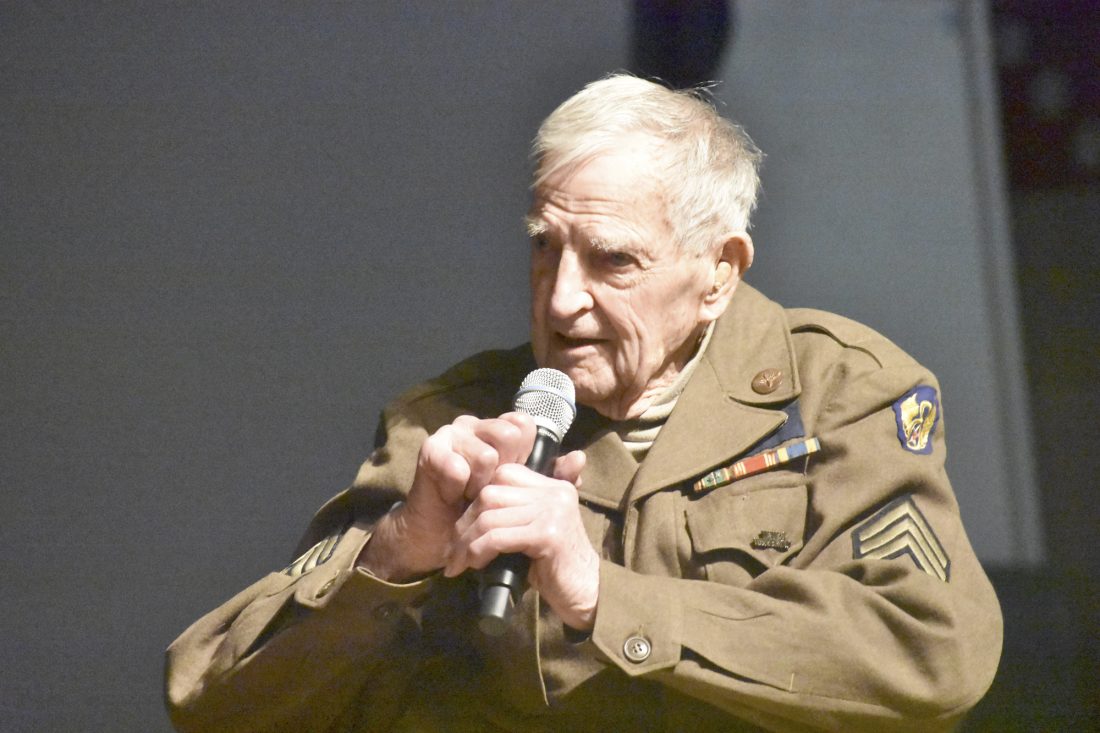 “While we run across a lot of veterans in this program, sometimes there’s just a story that needs to be told,” Cessna said.

His message to students who were close to the age he was upon enlisting was simply “think, think, think” and “use your common sense.”

Maple Grove Principal Julie Verdonik enjoyed Wight’s message to students that emphasized learning and thinking. Verdonik and Wight have known each other for several years. The two even periodically talk on the phone as Wight calls just to talk or tell Verdonik a joke. Wight has lived in the Bemus Point area for many years after returning from the war.

Verdonik wanted her students to learn from Wight’s story including the heart ache and hardships of his journey.

“To me this is education,” Verdonik told The Post-Journal. “This is the best education. I wanted Maple Grove students to experience that.”

“I’m thrilled we could do it. I’m honored to be able to do this for (Wight),” she continued.

Before the presentation began, Wight told the audience he was proud to be on the stage before them.

Operation Chowhound was designed to feed starving Holland citizens, specifically in Amsterdam. During this time 25,000 people had died while the Allied forces could not reach them.

A British-mission was carried out before the American attempt a month later. A ground mission also followed both of the air operations.

Wight, an airplane gunner and radio operator, recalled hearing an announcement calling for volunteers to join the mission – he answered the call.

The mission was during a temporary cease fire with the German military in order to provide food to those in need.

The stipulations for the truce included Allied forces remaining in specific zones during the flight mission. But Wight remembered his group never being informed about the specific zones. The plane he was flying in received incoming-German gunfire while throwing rations and food provisions out of the open door as it entered no-fly zones.

“That was scary,” Wight said.

But Wight’s missions, while mostly “scary” weren’t as humanitarian as Operation Chowhound – something he carried with him many years after.

Wight attempted to enlist following the bombing of Pearl Harbor on Dec. 7,1941. The war officially began in 1939, years before the U.S. entered the fight. Wight knew upon learning the U.S. was attacked that his country would soon be involved.

“All of the students there with me – classmates – said, ‘Wow, we’re going to get into this’ and we were a little excited,” Wight said.

Wight joined the Army in 1942 as he was not given permission to join by his parents initially. Wight’s brother was already enlisted at that time. He was assigned to the 385th American Bombardment Group. During the war, Wight flew in bombing missions all across Europe.

Wight remembered one mission when his B-17 bomber was hauling what he described as“jelly bombs” that were volatile and began leaking.

“I said, ‘Man, if we get any incoming fire like we did last week … this thing will go up like kindling,’” Wight said.

He admitted he was scared, but made humorous remarks as he recalled the frightening mission.

Later in the war during Operation Chowhound, Wight recalled his bomber flying dangerously low as they needed to protect the rations from being destroyed that they were dropping out of the plane.

“We were at treetop height,” he said.

When his plane began taking fire, he recalled a fellow soldier falling out of the open bay door, but he was miraculously caught by two other airmen. The mission dropped 4,000 tons of K-rations to the occupied-Holland below.

Years later, Wight met one of the many people who received those rations. In South Carolina, the Amsterdam native recalled watching the bombers fly across the sky and was amazed they didn’t crash into each other on that day in May 1945.

“He told me he was 19-years old (at the time of Operation Chowhound) on the top of a building watching all of the planes come in,” Wight said.

Walking away from the person he helped save in 1945, Wight felt something come over him that he never experienced before. On stage in the Maple Grove auditorium, Wight became noticeably emotional recalling his feelings while marching along the coast.

“The lord put his hand on my shoulder – somebody did – and said ‘Phil, you dropped bombs on people. You’ve now been told you’ve saved people. I’m going to forgive you for your sins,’” Wight recalled being told after meeting the once 19-year old Amsterdam boy who was saved by Operation Chowhound.

Article originally appeared in the Post-Journal