The facts about Grace Galloway and her life as published in a number of Post Journal reports:

Grace Laverne Galloway was the only daughter of three children born to Mr. & Mrs. John Galloway, 405 East Fifth St., Jamestown, New York. Mr. Galloway had made his riches in the oil fields near Titusville, Pennsylvania.
Grace was a promising opera singer and frequently appeared at Chautauqua Institution. She contracted tuberculosis while studying music in Boston, Massachusetts, and had gone to Asheville, North Carolina for her health. She died November 2, 1898 less than a year after contracting the disease, while on a return trip to Asheville. She succumbed in Pittsburgh as she could go not further.

Her father had seen a monument in a Buffalo Cemetery that was worthy of Grace, and he engaged an artist in Pittsburgh to model Grace’s figure in clay using her last picture. The model and the dress were sent to Florence, Italy to be carved in marble. The statue is true to her height and figure. The dress is said to be a graduation dress made by Mrs. Loyal Bushee, who was a popular seamstress for wealthy families. John Galloway and his father, who were masons by trade, constructed the rest of the monument.

The statue was enclosed in glass when it became evident that the elements would eventually destroy the statue. 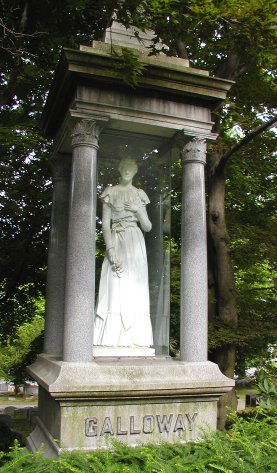